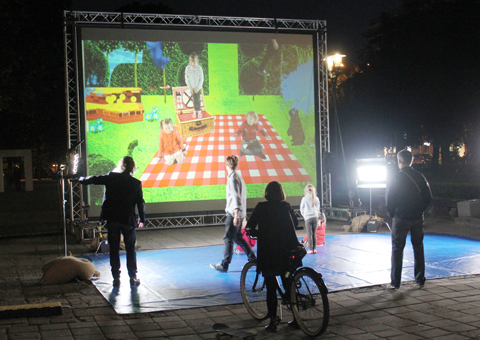 Paul Sermon is Professor of Visual Communication at the University of Brighton, UK. He has developed a series of celebrated interactive telematic art installations that have received international acclaim. Paul was previously Professor of Creative Technology at the University of Salford and has worked for over twenty years as an active academic researcher and creative practitioner, primarily in the field of interactive media arts.

Having worked under the visionary cybernetic artist Professor Roy Ascott as an undergraduate Fine Art student at the Newport School of Fine Art in the mid 1980s, Paul Sermon went on to establish himself as a leading pioneer of interactive media art, winning the prestigious Prix Ars Electronica Golden Nica in Linz, Austria, shortly after completing his MFA at the University of Reading in 1991. An accolade that then took Paul to Finland in the early 1990’s to develop one of the most ground breaking telepresent video installations of his career ‘Telematic Dreaming’ in 1992.

In the framework of Connecting Cities he has developed together with Charlotte Gould the telematic project Occupy the Screen which was shown 2014 in Riga and Berlin.