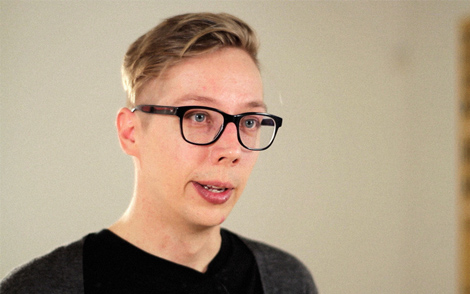 Award-winning Toronto-based artist Jeremy Bailey is renowned for his use of augmented reality technologies and computer vision graphics to produce stimulating works of trans-media and live performance. Bailey makes use of an over-embellished middle class, white-male ego, to subvert, critique and poke fun of the dominant hierarchies often associated with new media arts and its technologies.

Bailey has exhibited internationally, both in solo and group shows, and as part of extensive residencies, including FACT, Liverpool; Shargorod, Ukraine and MQ; Vienna. Recent projects include performances for Transmediale, the Stedelijk Museum, FACT, Tate Liverpool, and Rhizome at the New Museum in New York.

For the Connecting Cities Network he performed the project ‘Master/Slave Invigilator Systems‘ in Liverpool, Brussels and Dessau within the Networked City 2013.